I wanted my setting of AMAZING GRACE to reflect the powerful simplicity
of the words and melody - to be sincere, to be direct, to be honest - and not through the use of novel harmonies and clever tricks, but by traveling traditional paths in search of truth and authenticity.

I believe that music has the power to take us to a place that words alone cannot. And so my own feelings about "Amazing Grace" reside in this setting itself. The harmony, texture, orchestration, and form are inseparable, intertwined so as to be perceived as a single expressive entity.

The spiritual, "Amazing Grace," was written by John Newton (1725-1807), a slaveship captain who, after years of transporting slaves across the Atlantic Ocean to the New World, suddenly saw through divine grace the evilness of his acts. First published in 1835 by William Walker in The Southern Harmony, "Amazing Grace" has since grown to become one of the most beloved of all American spirituals. 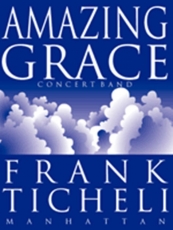